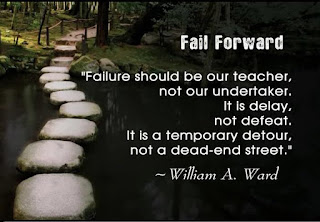 SO this subject is one I get passionate about. Too many people are going on through life feeling like a failure, living in failure, allowing failure to hold them back, crush their spirit, and paralyze them from actually LIVING life. So when I speak on failure I tend to get a little heated.

I've always felt like a failure. I've always thought I was never good enough, strong enough, fast enough, smart enough, etc. I put these expectations on myself as well as my parents on who I thought I was. Instead of who God intended me to be. I'd try to do things that pleased others instead of really figuring out who I was. In the end, I was a drug addicted, who dropped out of high school, involved in terrible things that ultimately just made me feel worse & worse. If i felt i was a failure & everyone around me felt that, why not just BE that? Possibly you're feeling like you've failed somewhere in life, or maybe even right now you're in that spot.

Here's what i've not only learned, but embraced. Failure is NOT a person! Its not even a real thing. Its a made up facade that is typically said by others to beat someone down. Let me explain. When you attempt something brand new, do you get it done correctly the first try? Typically NO! Look at babies, they must learn to walk, that process takes time, they must fall over & over & over again before they finally start walking. Learning to play basketball, you must miss a heck of a lot of shots before making 1. Even those in baseball who get paid MILLIONS of dollars miss 7 out of 3 times, and before they got to THAT point they missed a heck of a lot more.

Failing is not real. Please understand this....

Failure is learning. Remove the word from your vocabulary. You can't fail, you can only learn. I went through life not realizing I was learning who I was, learning what I liked & didn't like. Learning to not allow others to speak into my life who weren't there to lift me higher. I might be young, but because i've made the choice that everyday is a learning opportunity, every time i miss the shot I have a lesson to learn & I learn from it, I've become successful & a sought after leader & mentor. Just because i'm not where I think I should be simply means I have more to learn before I can get there. Take that to heart. What do you need to learn now to get to where you want?

You're not a failure, you're a student. We all are. Find your teacher!
Posted by Unknown at 11:57 AM No comments: 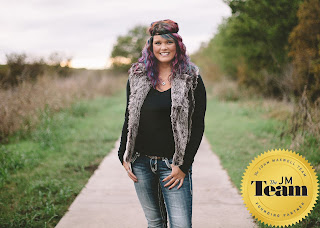 So in October I was feeling my network marketing organization had reached its peak. That my leadership was at its point that we just weren't growing any more. I wasn't feeling challenged, my brain was getting bored, and I knew deep down inside that I needed to create another stream of income. I prayed, talked with my husband, prayed, talked with my close friends. I had narrowed it down to 2 different thoughts. One was less expensive & would take much longer to see a turn around on. But was also a tad less intimidating & also less pressure. While the other was intense, frightening, and VERY expensive. I did however see the bigger picture & larger benefits to it.

I jumped into the John Maxwell Team. Started at the John Maxwell University & have been challenging myself, my thinking, and my perspectives since. I've always said success is in the uncomfortable, so why wouldn't I follow my own advice? I've held several virtual mastermind groups & was able to go through a small part of some people's journey with them in self discovery. Absolutely AMAZING feeling. I also took on several coaching clients & helped them with personal development as well as business development. Watching their success snowball rapidly was & is a phenomenal feeling. I can't even explain the joy I feel watching people gain confidence, feel empowered, and believe they're unstoppable.

March 12th I leave to Orlando to get my official John Maxwell Certification. Go through some intense trainings, meet John Maxwell himself & attend his birthday party. And of course just be around 1700 other like minded individuals all hungry to add value to other people. I'm nervous, I have self doubt, this is very challenging for me, tons of pressure, and way out side of my comfort zone.....sounds like a recipe for success to me!

I can't wait to break into the motivational speaking, I love being able to fire people up to get out there, change lives, impact people, and really see how special they are. I am equally excited for my new coaching clients who are ready to take their self development & business development to a new level. And once back from Orlando I'll be starting up some more mastermind groups to brainstorm together, grow together & conquer together.

I committed to bettering myself, becoming a better leader & raising my own leader lid, in turn my network marketing organization is on track for a record breaking month, we're getting back on the right path, and I'm full of passion & purpose again!  Until next time......
Posted by Unknown at 2:34 PM No comments:

So recently our personal trainer suggested we try this UBER car service thing. I've just recently heard of it within the past couple months. It seemed a bit awkward, but after evaluating it, its really no different than a Taxi. I mean both are random strangers, in their car, with their driving. Both go through back ground checks  are tracked by the company.

We jumped in & did it. On our way to the airport our driver was Kelly. She was amazing. We were her 2nd customers ever, and she was our first so it was great. She was warm friendly & i gave her 5 stars (love that you can rate them, careful they can rate you too) I actually told her how much i wanted her on my network marketing team, then as we hustled through the airport & got on the plane it simmered inside. I couldn't get over this novel idea. I asked Dameron (my husband) what his thoughts were on this. He admitted it wasn't as bad as we had thought. He was already looking for a 2nd stream of income besides his network marketing business. AND his Mercedes that our company pays for it branded. All i could think about was the networking opportunity.

While in Vegas He started the process of becoming an UBER DRIVER. He hasn't done a drive yet. But right now he is at an Uber Pizza Party in Dallas HAHA As i researched this company more, my eyes were opened in a couple of ways. It was founded in 2009, yet i'm JUST hearing about it. Its a BILLION dollar company, yet i'm JUST hearing about it. I reflected back to my "main bread & butter" my network marketing company which is still a baby, and get really excited as we're only 3 & our annual goal this year is 1/2 a billion! SO much growth to come. And my rockin husband will get to drive his very branded car to drive people around, make money & network all in 1. Looks like a win win to me.

So in my book thus far UBER is a thumbs up. I will be sure to post an update later on after he's got some drives under his belt. I'm sure it'll give him some good stories. Remember when opportunities present themselves to you, JUMP! Honestly 9 out of 10 times opportunities are a divine appointment for you, don't overthink things or you'll miss the boat.
Posted by Unknown at 1:28 PM No comments:

Well i've decided to create a blog. I recently shut my facebook account down, its been 10 days. WOW what a 10 days HAHA have you ever shut your facebook down before? Its like all the sudden, what do i do now? What a reality check. I quickly realized I wasted far too much time on facebook. I have much to say, but is facebook really the place to say it?
I've certainly learned much about myself. I've learned that not everything i think needs to be said, especially on a public forum. I've also noticed my creative marketing abilities have surfaced again. I also have found who really wants to be in contact with me and who doesn't. After so many attempts in telling people my number to text me, hardly anyone did. Why is that? Why has society become so socially anti-social? Seems like an oxi-moron to me. If you stop and look at society they all crave personal interaction. Not much farther til social media gets faded out. I can already see it.
Well until next time, thanks for reading :)
Posted by Unknown at 11:51 PM No comments: